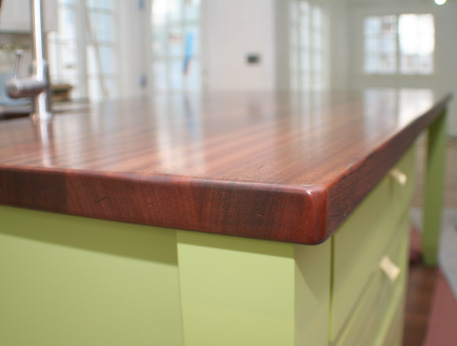 January 13, 2011 (Germansville, PA) – Grothouse, a premier manufacturer of custom-built wood surfaces, will be featured in an upcoming episode of the PBS home improvement television series This Old House®. The episode marks the third appearance for the Lehigh Valley based wood surfaces manufacturer.

Grothouse was selected to manufacture a wood island countertop for the Auburndale House renovation project in Massachusetts. The project, located on Boston’s most famous Charles River involved the complete renovation of a 1940s Colonial Revival home as part of the This Old House® 31st season nationally.

“It’s an incredible honor to be included in another episode of This Old House®,” stated owner Paul Grothouse. “It is one of the most well-respected home improvement resources currently available, so for us to be considered as a supplier and participant is phenomenal.”

The flat grain design of the island, which is built using planks of wood, is a construction chosen to reveal the grain of the wood. Paired with Durata® finish, the surface is maintenance free and ideal for countertops with sinks.

Grothouse was previously featured as part of a 2009 episode of This Old House®. The project, located in Newton Centre, MA, included a 2-1/2 inch thick Sapele Mahogany island countertop as the centerpiece of the home’s newly-renovated kitchen.

The latest episode will begin airing in mid January. Interested individuals can find the air times by visiting the This Old House® website and clicking on the link for “Show Descriptions” listed next to “Auburndale House.”